I just want to let you know that I’m currently onto my 4th portion of fruit as I’m writing this… I ate two peaches, two plums and I’m currently having half a kilo of melon…

I’ll regret it in the morning…

Anyway, I finally had my second therapy session with the psychologist. It was in the afternoon, so I had plenty of time to prepare.

When I went there we discussed the results and she asked me how I felt about them. The truth is, I was expecting some of the things but others were a huge shock to me. I haven’t written what exactly the results are on the blog and I prefer not to.

The main thing is that this is just a stage in my life. This is not me and what I’m feeling or doing now is not who I am. It’s just going to take a lot of time to recover and it’s going to be extremely hard.

I feel like the doctors don’t actually believe me about my past and my traumatic experiences. They just keep telling me that I should forget the past and move on. Easier said than done…

How do I do that when I’m being pressured every single day?

The new medication has, of course, made things worse. Sadly, that’s expected from these kinds of medications. However, I really can’t bear it. The psychologist asked me how my days were going from the moment I wake up.

Truthfully, I’m waking up not only anxious but also scared. Extremely scared! It takes me about 2 or 3 hours just to get ready and do something. I clean, cook, go to the gym, work on my blog and then read a book. I usually go to bed past 2 am and wake up at 9 or 10. It’s like that every single day.

We discussed how I should make a schedule and try to keep up with it. For instance, even though I’m constantly having intrusive thoughts, I should assign hours to the things I do. Right now I work on my blog in the morning, afternoon and evening. I haven’t watched a single movie or one of the TV series I follow. They just don’t bring me joy, yet I should try doing it. The psychologist told me she’s going to send me a list of possible things I can do and I can make my own list. I promised I’ll give it a try.

We discussed my family and personal issues. She advised that there is no point to keep trying to convince someone of their wrongdoings and seek an apology. I guess I’ll just have to pass this stage and try to move out as soon as possible. I don’t want to stay here, so I might go back to the UK.

I also asked her about a problem I had in one of my previous relationships. Basically, I was making silly and rude jokes every single time the mother of this guy was buying him underwear, socks and clothes. The thing is, I’ve never seen a mother treating a grow-up man like this and I was making fun of him. I now realise that it was wrong but I wanted to know if this is something normal.

While I was on the subject, I also told the psychologist about this conversation I had with his mother. We were in the kitchen and he was still sleeping. I was explaining to her that she has a lovely son but he, like every single human being, also has flaws. She didn’t even look at me when she told me that her son is the most perfect man and no woman will ever deserve him.

I didn’t even tell him about this conversation. Nevertheless, since then, I’ve always felt threatened. Every single time they had a conversation, a chat over the phone, texting… I was convinced that something will happen.

So, I asked if this is normal.

The psychologist told me that some mothers are extremely jealous. Even if they don’t want to or are not realising it, they are jealous. They will keep doing and saying things like this in order for their sons to prioritise them. In short, no woman is going to be perfect for their children. If a man loves a woman that his mother doesn’t approve of, he needs to make a decision. That’s not to say that he should stop contact with either party, but he needs to put grounds.

I sort of felt relieved when I heard this because I carried a huge weight on my shoulders. I thought I was imagining things but I guess I wasn’t. Now, I’m just sad that I said those things but I’ll have to try and forget.

The psychologist also told me that she’s seen a lot of couples and usually the ones going through tough times stay together. Even if there is a stage when they can’t I stand each other, they always find their way back to each other.

I just don’t know what to think or feel anymore…

We now need to focus on me and what my plan is.

Before our next appointment, I need to start a schedule and work on it.

I hope you’re enjoying these updates.

I think mental health is extremely important and I hope if you’re struggling and reading this, you’re going to seek help!

My Visit To The Psychiatrist: Part II 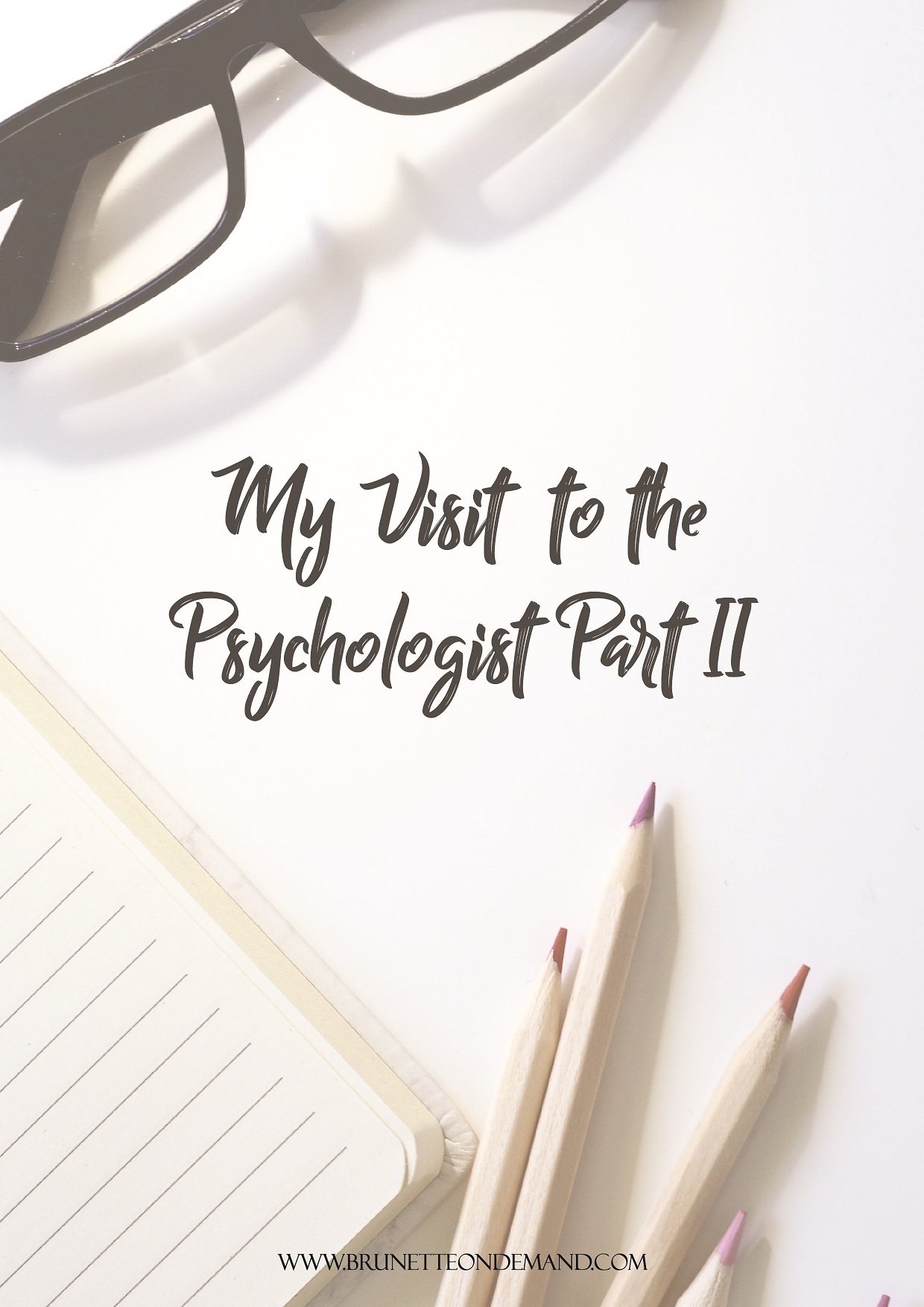 6 Ways To Spend Less Time On Your Phone

The Art of Eccentricity and What It Means for Women

How to Save Money to Buy Your First Car

Christmas Gift Guide ’19: Gifts For Her