If you’ve been a follower, you’d probably seen that I was gone for 2 weeks.

I had to leave the UK immediately. Although I want to say why I don’t think I’m in the right state of mind to talk about it. However, I’m determined to actually write about these things. I feel scared, ashamed and guilty…

But I have to take responsibility for what happened and why it happened.  I need to let go and I need to do it here, on my blog. For a long time, I used my blog for the sole purpose of giving advice on fashion, beauty and lifestyle. I think it’s about time to write about the things that also matter the most to me – mental health and wellbeing. I guess that could fall under the ‘healthy lifestyle’ category?!

Why I went to see a psychiatrist?

I haven’t been feeling very well lately… When I say lately, I mean for the most part of my life. I’ve always been feeling down, lonely, unworthy and helpless. I’ve been extremely anxious almost every single day since I’ve been a child. I don’t want to discuss everything right now. I’ll leave it for another time.

Just above two months ago, I finally went to see a doctor in the UK. I lied that I’ve been feeling depressed for about 6 months… However, it was enough for the doctor to prescribe me antidepressants. I was prescribed Zoloft 50mg (also known as Sertraline). It had a lot of side effects at first. I tried killing myself… In front of my partner. He had to call the police and ambulance. There is no need to explain how damaging something like this is for the mental health of all people, involved in a suicide attempt.

When I started the antidepressants in June, I realised that there might be something else that has been preventing me from seeing the point in life. It wasn’t just depression and anxiety; it was something more.

I thought I was bipolar but some of the symptoms didn’t make sense. Then I stumbled upon personality disorders.  There are 10 main types. I could relate to more than one of the types. Yet, one particular type was spot on.

In short, I experience very strong emotions and shift between them quite quickly. I see the world and the people in ‘black or white’. I can love someone very deeply one day and hate them the next. I constantly feel threatened. I constantly feel that people are out to get me.

I started seeing a specialist in the UK but I had to leave urgently. I left the UK on 2nd August after 10 years of living in Guildford. I came back to my home town Plovdiv in Bulgaria.

I had no idea what to do.

Having not seen or spoken to my father for more than a year (or maybe two?), I had to come back to him. I explained to him that he had caused me huge pain and trauma, leading to my current state. I asked him for help. I asked him to take responsibility for his actions and what he’s done to me and my mother. Because of him, I made a lot of people suffer…

He said he’ll help me.

I needed to see a psychiatrist, fast. My father found the best one. I didn’t know how good he was but if he says so, then fine. Unfortunately, he wasn’t available for almost 2 weeks! He was nowhere to be found.

After one night of me going absolutely mental, he went the next morning to wait in front of the office. He was vomiting while waiting, he was that stressed. When he asked them for an appointment, they said the earliest is in October. Omg, this psychiatrist was that good… It was explained that I can’t wait that long, I needed help! They saw how bad things were and scheduled us for an appointment for the following week.

Well, today I went there with my father. When we went in, I kindly asked the doctor if I could speak alone with him for a couple of minutes, without my father next to me.

I wanted to know…

Firstly, he said that it is absolutely normal to feel like this and behave like this. All of the things that had happened to me led to my current state. Although it’s very painful, it’s normal to hurt the people around you when you’re like this.

However, we can’t live like this forever. If we don’t get an apology or explanation from the people that have hurt us, we’ll never be able to move on. So, it was best not to involve my father at the moment. We had to prepare me for my ‘battle’. It was and is going to be a long battle.

Secondly, I had to stop with the suicide attempts. If I couldn’t find the strength to stop, then the treatment would be quite different. I would end up in the hospital. I would probably never be able to recover. I just had to stop! Not with the thoughts, he said. With the attempts. The thoughts are not going to go away and you need to accept them. Just don’t act on them.

I told him about Zoloft. He asked me how I was feeling. I explained about the side effects and that I keep going back and forward. I didn’t know if they worked or not. He told me a story about a client of his (no name, of course!). She came back from abroad with 8 diagnoses… She was first depressed, so they gave her antidepressants. She then developed a bipolar disorder, so they changed the medication. She then developed something else, leading to another type of medication. In the end, they didn’t know what was wrong with her and how to treat her. It took her years…

So, he told me about this Genecept Assay test. It is a genetic test created to assist clinicians in making treatment decisions for patients with a mental illness. The test examines patient-specific genetic markers that can identify treatments that are more likely to work as intended, not have an effect, or cause a negative effect. You can read more about it here. It’s a quite expensive test – above 1,400 lv, which is quite a lot for Bulgaria (or anywhere!). Yet, it’s a lifetime test. It will tell you why you’re like this. It will tell you if you’re more likely to develop certain mental illnesses. It will also let you know what you need to do in order to get better.

When he started taking my details, my father, of course, was constantly interrupting. He was telling the doctor all of my personal details, including the street address… The doctor looked at him calmly and said: ‘You need to back off, you’re quite dominant. I think your daughter knows her own address. At the moment, I’m treating her, not you. She’s not 5, let her speak.’.

I really liked this psychiatrist…

‘There are a lot of strong people out there who go through the same thing if not worse. There are times when you can’t help yourself and you’ll need to get outside help. Medication and therapy will work. However, you need to have your family and friends by your side. No matter what you do or say, there has to be someone next to you. Someone to protect you and be ready to go through this with you. Support is more important than medication and therapy. We, as professionals, will try to do everything to help but your loved ones will be the ones to help you’, said the doctor

The doctor reduced the Zoloft to 25mg as he didn’t feel it was working and prescribed me some mild medications to help me sleep and calm down while he gets the results from the genetic test. After that, we’ll see what medication will be the best for me.

After the appointment, I went to have this Genecept Assay test… I was so nervous. I was sweating everywhere… Even my crotch was sweating… sorry… but I looked like I peed myself… The girl was so lovely, she asked me so many questions – about me, my past, my relationships. She was even surprised that I was 28! She said I looked 19! Lol! ‘Biggest compliment of my life!’, I said. The test took a minute and I’ll have the results in a week.

On Friday – I have my first therapy session.

On Saturday – I have my psychological test.

I really hope people will read this and make them think twice before they take mental illness as a joke. Mental illness is not a joke. It’s not something you should live with or deal with silently.

It took me quite a lot of strength to write this.

I’ll be taking you on this journey with me.

I’ll be pouring my heart out to you and to myself… I guess.

I want to change.

I hope I convince you that there is no shame to seek help.

Actually, the sooner you seek it, the better.

You’ll not only help yourself, but you’ll also help your loved ones.

Trust me, I’m talking from experience.

P.S: I’ll still be writing about other stuff – like designer dupes, fashion tips, etc, but this is going to be something quite special. If you find it interesting or helpful, share it! 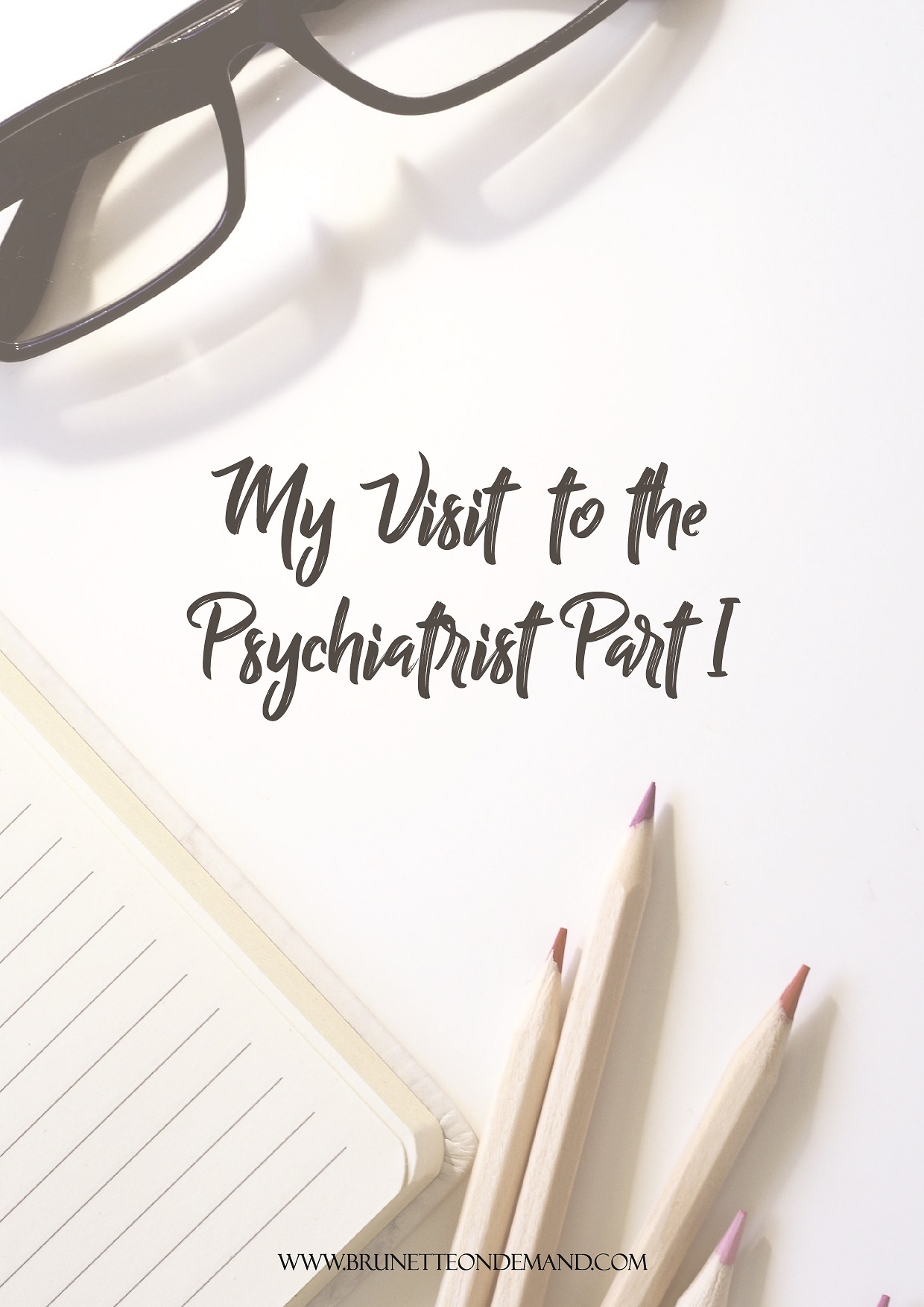 Traditional vs. Electric Fireplace! Choose The Ideal Option For Your Home

Is Peanut Butter Healthy For You?